The farmer used to handle him and he’d live in a stable. He used to peer over the stable, he was quite happy and he had his ladies who used to come round.

Now and again there would be two or three (laughs), the cow, a couple of heifers, he’d sort them out and then go back in his stable but I think he was a bit dangerous. 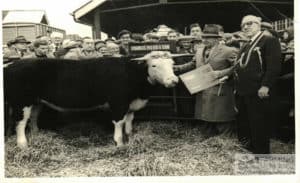