I bought a breed called Clun Forest and we built those up to quite a number and used to graze them up on Culver Down a lot of the time.

There were no fences on the edge of the cliff at all and they … in those days there weren’t so many people with dogs as there are now and there wasn’t so much traffic up there so they grazed Culver quite happily but we hadn’t got many… there weren’t at that time in the early days, there weren’t many sheep proof fences on the farm so we had to use temporary fencing and it didn’t work all that well.

They used to get on the road and they used to get in the neighbour’s fields and so I was then lectured by the owner as to why I hadn’t told him he’d got a problem.

And I said to him, “Well, you told me you had very little money and I thought if I came to you and said we’ve got to spend a lot of money on fencing, you would sack me.”

Whereupon he said, “Well you know very well I can always find money for things that need doing” and so we started fencing the farm and Mr Henton of Chillerton came along and put up literally miles of fencing, miles of proper fencing and we had a properly fenced farm. 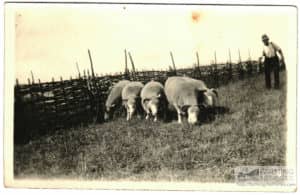