I can remember, well every year we used to send the older ewes for, to Wilton Sheep Fair, and then buy in another lot of young to carry on for the next season’s lambing. And back in those days they used be brought from Salisbury down to Lymington where there were holding pens.

They used to be driven on to the boat on foot, down the main gangway at Lymington, and then they’d come off at Yarmouth, up the slipway, and there used to be holding pens there as well, that they… some of them used to stop there overnight in the holding pens.

Some were loaded straight in the lorries but I can remember our own sheep on several occasions, coming off the boat or out of the holding pens and we used to drive them on the road from Yarmouth to Shalfleet to go to the farm at Newtown, but then that was in my earliest memories, but after that they used to be transported from the markets or the fair by lorry all the way to, back to the Island.

They didn’t have to do that on the boat because obviously after they’d been off and crossing … ‘cos they used to have the compartment on the boats for actually holding sheep in these pens, at the side, well two sides. Very much the same as they are now only a lot smaller obviously. About a quarter of the size.

Well I can remember some of those early boats in my memory were … about a dozen cars and they were full. But I can also remember not only as myself we’re talking about sheep, but I can remember cows and horses being brought across like that as well and being held in those pens on the side. 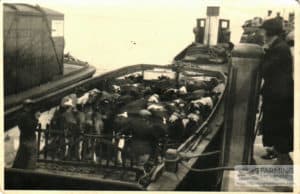