My first memory of the tractors at the farm was the old Fordson Major, standard Fordson, but they had one, the first one I remember, my first memory of the tractor, that one, and then I can remember when they got the second one when the War was on, then, and then two of the horses went when they got the second one, which only left the one at Pits that was still used, taking mangles out to feed to the cows and so forth.

Like I was saying, the tractor took over then with the majority of the work. And then ’49 we started getting a bit more modern with the later type tractors. 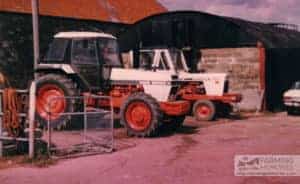