Mostly rabbits and hares. Owls. There were owl slits in the barn, did I show you the barn? I don’t know where it is. Yes the owls used to sleep.

There were also wild cats up there that they allowed them to live there because they would keep the rats and the mice down, at Park Farm. I think most farmers were the same, there would always be a few wild cats around.

I don’t know what I’ve done with it. Yes, so the owls could get in and out and they can also get in there and pick the mice out. When the mice were in there eating the corn. Here you are, owl slits. 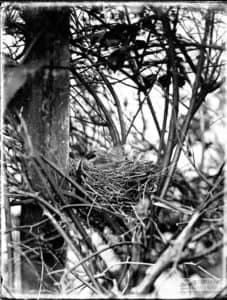