The hares used to be a big pest to them and they used to have these big organised hare shoots …… and they’d shoot hundreds of them wouldn’t they and they used to walk in a line, didn’t they, half way across the …I think that … how did it work?

They had two lines and you started one line at Calbourne and another one right out at Freshwater way and just walked together. Walked towards one another and the hares would …then the poor things got shot but there were so many of them, they used to shoot hundreds of hares.

I’ve seen photographs and heard stories about it but I mean we like to see the hares now, there’s not many of them really. But what happened to the hares?

It wasn’t because they were shot, there was something else went wrong with it and they just sort of, well they didn’t die right out but … 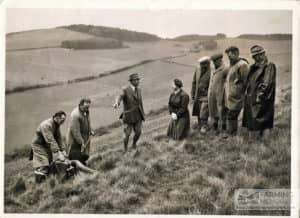