The bird life has changed. That’s changed tremendously in the years I’ve been here.

Didn’t realise … my grandmother used to tell me they did exist up at the Rowridge by the television mast on that area, but otherwise you never saw a buzzard.

Well now, they’re everywhere, just everywhere and I think really there are beginning to be too many of them because I think they clear up a lot the squirrels and things like that. I don’t know that but I would imagine they did.

And the other thing were seeing a lot of now are raven. Lots of pairs of raven around here. It’s something we wouldn’t have believed before.

I mean the only place where I ever saw a raven before was the Tower of London. That was when I was about 10. I don’t know if the same ones are there (laughs). 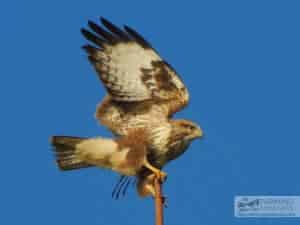