But in the Winter of ’62-‘63 when we had horrendous snow, I woke up on Boxing Day to find that the snowflakes falling outside at 4 o’clock in the morning were as big as tea plates and I said that I would have to start to walk. My father wouldn’t let me walk on my own, so we started off at just gone 4 o’clock in the morning, and we got to Newchurch at 12 o’clock.

It took me eight hours to walk there. I had to go there because the farmer’s wife wasn’t really used to milking the cows. I don’t think she’d have known how so I had to get there to milk.

So instead of milking twice that day, I only milked once and then when I’d fed the calves, bedded everything up and done all my jobs, we set off for home and we got home at midnight and I did that every day for six weeks until they’d cleared a bit of the road.

In the meantime, my Grandmother had nominated me, unbeknown to me and my family, for an award, and I actually won an award.

There were I think 10 or 12 people in the British Isles called ‘Heroine of the Storm’ and I was nominated and I was one of the winners and I won £20 which was an awful lot of money in those days and a bouquet of red roses.

Unfortunately my Grandmother died a week before we heard, so I put 11 roses on her grave, my father stuck the other one in the garden and it grew into the most beautiful red rose bush and we had it for years. 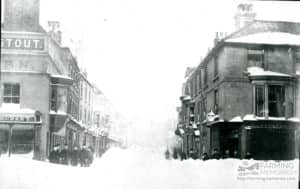