There was several Young Farmers Clubs. I was in the one at Shanklin. There was also Newport, Ryde and Freshwater, or West Wight and it was really good fun.

We used to, in the Summer, go to different farms, so on Friday evening, we would all meet at Shanklin Bus Station which is where the Co-Op now is, the large Co-Op. We would all get in a coach and we would then be taken off to a farm that was expecting us and the farmer would show us around and then at the end of the evening, the best part was the food. So the farmer’s wife would provide a lovely buffet and we’d have a really good time.

There would be perhaps 60 people in the coach and maybe one or two farmers who were slightly older who had their own cars would come as well. So you might have 80 or 90 people at a farm walk. Be taken all round the farm, explain the crops and the stock and it was really interesting.

And then, once or twice a year we’d have competitions against each other, so we might have a quiz evening and obviously Shanklin would do there darndist to try and beat the West Wight, Newport or Cowes, and I expect there was a cup or an award if you won and we also had rallies and I remember going  to one at Merrie Gardens Farm, which was Mr Pursley’s at the time, which is at Lake, near where Morrison’s is now, and you could enter all sorts of competitions so you could go in for knitting, sewing, a farm worker’s lunch box, a floral arrangement, plant identification, feed identification and that’s way that you learnt.

Even if you didn’t win, you hoped that you’d learnt something and you got awards for that and I’ve got some certificates and then also Young Farmers would enter into the Isle of Wight County Show at Northwood and I used to do that as well and sometimes be lucky enough to pick up a card or win the class, so it was all good competition and there were a lot of young farmers then.

And we used to have Dinner Dances. We used to have them very often at the Channel View Hotel at Shanklin and they’d be 100-150 people go all from the farming community and it was really good. Yes, Young Farmers was a very good opening but sadly now there isn’t the opening in farming because of the lack of farms and I think the modern technology today, a lot of young people in the country are not so interested in farming anyway, so I don’t think they have any meetings now which is all sad really. 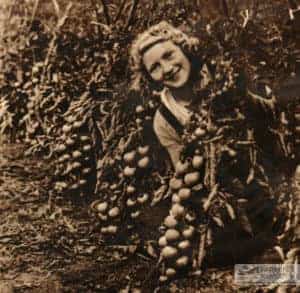