Christine Broom on The County Show

With sheep for example, you might have lambs up to six months old and you might have gimmers which are ewe lambs before they’ve lambed. They might have a class for those, and then older ewes and then young rams and old rams, so yes, in the sheep line.

In the cattle there’d be heifers say under six months, heifers up to eighteen months, and then there’d be cows another class, and a class for bulls, and of course years ago people did take their bulls in on a bull pole so the bull had a ring in its nose, and they would attach a clip to it and they would hold a long wooden handle so they could control it by lifting the nose up and down and that was the only way they could control the animal. But that took a lot of work because they all had to be trained to be led round before they ever went to the show.

Obviously dairy cows, they … I used to do stock judging for the Young Farmers Club so you look for the way the animal walks, if she’s secure and steady on all four legs. In other words she hasn’t got a weakness on her back legs, the way the udder that carries the milk is placed on the cow and that the teats are uniform and one on each corner of the udder and all the same length. And something called the ‘Dairy Wedge’ which is the area between the shoulder blade and the hip bone. The longer, wider and deeper it is the better the cow.

This is for judging, it doesn’t mean to say the cow is the best milker because I have been to some farms and judged cows where usually you have four cows to judge.

This is stock judging and they are always classed as ‘A’, ‘B’, ‘X’ and ‘Y’. And you have to place them in order and then you go before a Judge and you give your reasons.

For example, you would say, “I place cow A in first place because she has a deep Dairy Wedge, good action on hip and pin, well placed udder, good teats and therefore I place her first.” And maybe the last cow you would say would be ‘X’. “I place her last because she has a pendulous udder, she has a weakness on her hip and pin, she’s showing her age” and I’ve done that quite a lot, to then be told by the owner of the cow that the one that I placed last was actually by far the best milker. So she may not have been the best looker, but she would have been the best cow.

]And the same with pigs. The length of the pig, the depth of the pig, it’s done on confirmation more than anything. That’s how you judge them. Oh, yes. Yeah you select them, and when I used to show my pedigree Texel sheep, you are not allowed to trim them.

Some breeds you can trim them, trim their fleece so that it makes them look more flat on their back. In other words, little tricks of the trade but in Texels, you are not allowed to do any of that so all I used to do was get the cold hosepipe and just wash them all over the day before the Show.

Sometimes I had 24 sheep to wash which is no mean feat and it took nearly all day to do it but if you want to win something or to show your stock off to the best ability, obviously you present them in the best way. And you wear a white coat and you have a white halter and you try to do it properly.

And I’ve also taken some of my sheep to the New Forest Show where I was quite successful , but obviously not cost effective, but you did it to win a rosette and it probably cost me around £200 to take two or three sheep over there just to win a rosette, but it’s just to get a name in the breeding world so they say, “Oh, that lady from the Isle of Wight some really nice Texel sheep” and maybe they might want to buy a ram off you next year because of what you’ve presented on the day.

It’s a marketing ploy really. You might win like £5 (and a rosette) which wouldn’t have even bought your lunch. 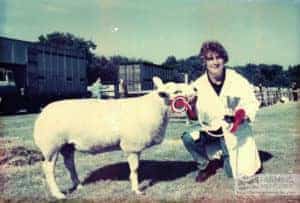