The beef cows reared their own calves. You know, they calved mostly without any assistance.

You had to help the old ones sometimes but they’d calve and you’d take … they’d calve in the spring, March time, and you’d take the calves off about the first week in November, wean them and they would be taken on and fattened and sold when they were oven ready.

There was the F.N.C. slaughterhouse which was originally Williamses, at Heytesbury, and Benalton and Hamilton had the one in Scarrots Lane.

Yes. That’s where they all went, yes, yes. Yes, the same place, yes.

Well as soon as they were heavy enough and good enough, they went. The single lambs would go 10 or 11 weeks old.

If the ewes had had enough milk and got them there, you know. 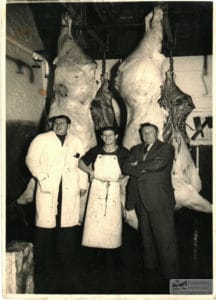