Got the cows in, they were all tied up then by the neck, and milked them …Isle of Wight Creameries had it. It was in churns those days, 10 gallon churns.

They came round every morning and picked them up so you had to have the milk ready by the time the lorry got there.

When I started, the top price was about three and nine pence a gallon.

Well that worked out at 18 pence a gallon. That was in the winter and in the summer it would get down to 10 pence.

You know, when the cows were on grass it didn’t cost them so much, you know the price varied with the time of the year, you know. 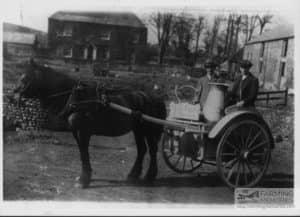