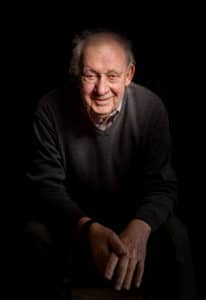 What is your full name?

When were you born?

Where were you born?

Was that the family home you grew up in?

Who was in your family when you were growing up?

Mother, Father, a brother and sister.

Did you have grandparents on the Island?

Can you tell me about your father’s occupation?

He was a blacksmith. His forge was just down from our house on Newchurch Chute. The blacksmith shop was built in 1902 and before my Dad took it over it was run by Mr Kingswell and his father. Mr Kingswell senior lived on the other side to our house. We lived on the left, him on the right as you look at the house. The blacksmith’s shop is no longer there, it is now Anvil House. My father was known as ‘WH Toms Blacksmith and Farrier’.

How old were you when you started work with your father?

I left school when I was 14 and started then.

Did your father teach you?

Yes but the Rural Industries Bureau also came and taught me welding. That was something my Father didn’t do.

What sort of thing were you making when you first started working as a blacksmith?

There was a carpenter’s shop just down below from the forge. They used to make coffins in there as well in the old days. The carpenters made the old wagon wheels and cart wheels and we would make the iron tyres to go on them. Commonly known as ‘wheel binding’. This was when carts and wagons were still used on farms and pulled by heavy horses. I’ve still got the platform we used to do the wheel binding.

Was much farming still done by hand in those days?

Yes, all the farmers were still using hoes and hoeing by hand.

Did you help with any work on the local farms?

Yes, I would help at the weekends and school holidays. I helped out by doing hoeing and threshing. We used a threshing machine, there was a big team of blokes, as many as ten blokes threshing. Gilbert Richards was the farmer at Pope’s Farm then. When I was about 11 or 12 I remember helping Gilbert thatch the old cow stable. He put the ladders in and I had to go into the building and thread a rope through, he pushed the needle down through the hatch and I had to thread it through. It was a thick piece of tarred string.

What kind of farm was Pope’s Farm?

It was a dairy farm and I also helped with the milking. I would have been about 11. When I was a bit older I delivered the milk too, before I started work. I had a bike with a carrier on the front. The milk was bottled up in the dairy into pints, half pints, pint and a half and quarts. It came straight out of the cow, into the cooler and then straight into bottles. It was also put into churns to be collected. The milking was done about 6.30am and the milk lorry came at 8am to collect it. I delivered it through the village on my bike.

Can you tell me about your forge, what did it look like?

Here is a photo of the bellows which are made from leather. It had the forge fire with a brick chimney which had a pipe going to the bellows. The pipe came up through the back of the forge and through a tew iron. You could light it with a bit of paper. The hotter you wanted the fire the faster you had to pump the bellows. We used to burn dust coal which gets to a higher temperature than wood. There was the water trough which had the coal at the side.

What were the tools of the blacksmith’s trade then?

Tongs with long handles, hammers, pinchers, the anvil which I’ve still got.

What did you wear to work in?

A leather apron. We didn’t wear gloves or anything to protect our eyes then. There was no health and safety then.

What sort of things have you made over the years? (Shows photos) Gates, trellises, fire baskets, plant stands, lamp stands, weather vanes, wrought iron work. I fixed the weather vane on top of the tower here at Newchurch.

Can you tell me about shoeing horses?

How often did the shoeing need to be done?

About every three months but it would depend on the work they did. I started out shoeing the heavy horses used for farm work but when that died out it was mainly shoeing horses for riding.